Studio Gang’s rippling design for MIRA (Folsom Bay Tower), located blocks from the Bay Bridge, makes reference to the classic bay window found in so many homes throughout San Francisco. The startling geometry of the tower was generated by the simple repetition of 10 unique bay geometries that migrate around the building as it rises, maximizing daylight and views. The resulting form appears to twist as bays shift laterally from one floor to the next.

Working with the architects, a tenable enclosure system was developed consisting of only three wall types for such radical geometry: three-dimensional opaque cover panels at the slab edge, infill vision and spandrel units, and a window wall at the balcony conditions. The most dominant and technically challenging component of the wall are the three-dimensional cover panels with their varying shapes, sizes, and changing interface conditions. Each panel was made from a massive single sheet of aluminum folded and welded into the various configurations needed by the project. The rippling effect of the facade relies on the uniformity of these panels between each other, and from bay type to bay type. Regardless of the variation, each panel fits within the 14-foot-wide building module, allowing them to shift seamlessly in relation to the other components, and ultimately create the mesmerizing effect Studio Gang was looking for. Full-scale mock-ups of these panels, along with mullion profiles and glass types, were reviewed from an early stage to confirm both the architectural and technical implications of the proposed design. 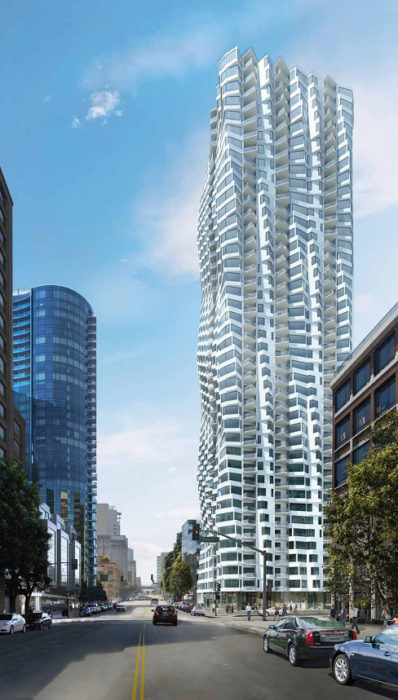